One Answer to Global Warming: A New Tax (and no solutions)

Editor's note: This is an example of the manipulation by the press & mainstream media that shows how they are blaming us for the pollution we cause, when in fact they have engineered the system we live in so that we have no alternative but to pollute, as the cumbustion engine is still around, here in 2008. We will all have to pay for carbon emmissions. People in the UK have to pay 50$ a DAY to drive an SUV. I'm against pollution, but this situation is extremely unjust!

Note 2: Obama is calling for a Carbon Tax. 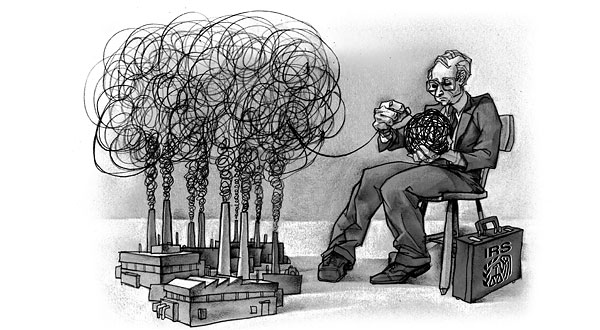 One Answer to Global Warming: A New Tax

In the debate over global climate change, there is a yawning gap that needs to be bridged. The gap is not between environmentalists and industrialists, or between Democrats and Republicans. It is between policy wonks and political consultants.

Among policy wonks like me, there is a broad consensus. The scientists tell us that world temperatures are rising because humans are emitting carbon into the atmosphere. Basic economics tells us that when you tax something, you normally get less of it. So if we want to reduce global emissions of carbon, we need a global carbon tax. Q.E.D.

The idea of using taxes to fix problems, rather than merely raise government revenue, has a long history. The British economist Arthur Pigou advocated such corrective taxes to deal with pollution in the early 20th century. In his honor, economics textbooks now call them “Pigovian taxes.”

Using a Pigovian tax to address global warming is also an old idea. It was proposed as far back as 1992 by Martin S. Feldstein on the editorial page of The Wall Street Journal. Once chief economist to Ronald Reagan, Mr. Feldstein has devoted much of his career to studying how high tax rates distort incentives and impede economic growth. But like most other policy wonks, he appreciates that some taxes align private incentives with social costs and move us toward better outcomes.

Those vying for elected office, however, are reluctant to sign on to this agenda. Their political consultants are no fans of taxes, Pigovian or otherwise. Republican consultants advise using the word “tax” only if followed immediately by the word “cut.” Democratic consultants recommend the word “tax” be followed by “on the rich.”

Yet this natural aversion to carbon taxes can be overcome if the revenue from the tax is used to reduce other taxes. By itself, a carbon tax would raise the tax burden on anyone who drives a car or uses electricity produced with fossil fuels, which means just about everybody. Some might fear this would be particularly hard on the poor and middle class.

But Gilbert Metcalf, a professor of economics at Tufts, has shown how revenue from a carbon tax could be used to reduce payroll taxes in a way that would leave the distribution of total tax burden approximately unchanged. He proposes a tax of $15 per metric ton of carbon dioxide, together with a rebate of the federal payroll tax on the first $3,660 of earnings for each worker.

The case for a carbon tax looks even stronger after an examination of the other options on the table. Lawmakers in both political parties want to require carmakers to increase the fuel efficiency of the cars they sell. Passing the buck to auto companies has a lot of popular appeal.

Increased fuel efficiency, however, is not free. Like a tax, the cost of complying with more stringent regulation will be passed on to consumers in the form of higher car prices. But the government will not raise any revenue that it can use to cut other taxes to compensate for these higher prices. (And don’t expect savings on gas to compensate consumers in a meaningful way: Any truly cost-effective increase in fuel efficiency would already have been made.)

More important, enhancing fuel efficiency by itself is not the best way to reduce energy consumption. Fuel use depends not only on the efficiency of the car fleet but also on the daily decisions that people make — how far from work they choose to live and how often they carpool or use public transportation.

A carbon tax would provide incentives for people to use less fuel in a multitude of ways. By contrast, merely having more efficient cars encourages more driving. Increased driving not only produces more carbon, but also exacerbates other problems, like accidents and road congestion.

But the history of cap-and-trade systems suggests that the allowances would probably be handed out to power companies and other carbon emitters, which would then be free to use them or sell them at market prices. In this case, the prices of energy products would rise as they would under a carbon tax, but the government would collect no revenue to reduce other taxes and compensate consumers.

The international dimension of the problem also suggests the superiority of a carbon tax over cap-and-trade. Any long-term approach to global climate change will have to deal with the emerging economies of China and India. By some reports, China is now the world’s leading emitter of carbon, in large part simply because it has so many people. The failure of the Kyoto treaty to include these emerging economies is one reason that, in 1997, the United States Senate passed a resolution rejecting the Kyoto approach by a vote of 95 to zero.

Agreement on a truly global cap-and-trade system, however, is hard to imagine. China is unlikely to be persuaded to accept fewer carbon allowances per person than the United States. Using a historical baseline to allocate allowances, as is often proposed, would reward the United States for having been a leading cause of the problem.

But allocating carbon allowances based on population alone would create a system in which the United States, with its higher standard of living, would buy allowances from China. American voters are not going to embrace a system of higher energy prices, coupled with a large transfer of national income to the Chinese. It would amount to a massive foreign aid program to one of the world’s most rapidly growing economies.

A global carbon tax would be easier to negotiate. All governments require revenue for public purposes. The world’s nations could agree to use a carbon tax as one instrument to raise some of that revenue. No money needs to change hands across national borders. Each government could keep the revenue from its tax and use it to finance spending or whatever form of tax relief it considered best.

Convincing China of the virtues of a carbon tax, however, may prove to be the easy part. The first and more difficult step is to convince American voters, and therefore political consultants, that “tax” is not a four-letter word.

N. Gregory Mankiw is a professor of economics at Harvard. He was an adviser to President Bush and is advising Mitt Romney, the former governor of Massachusetts, in the campaign for the Republican presidential nomination.

"There are some plain common-sense considerations applicable to all these attempts at world planning. They can be briefly stated: 1. To talk of blueprints for the future or building a world order is, if properly understood, suggestive, but it is also dangerous. Societies grow far more truly than they are built. A constitution for a new world order is never like a blueprint for a skyscraper."