FEDS THREATEN JOURNALIST WITH PRISON OVER REPORT ON ILLEGAL IMMIGRATION 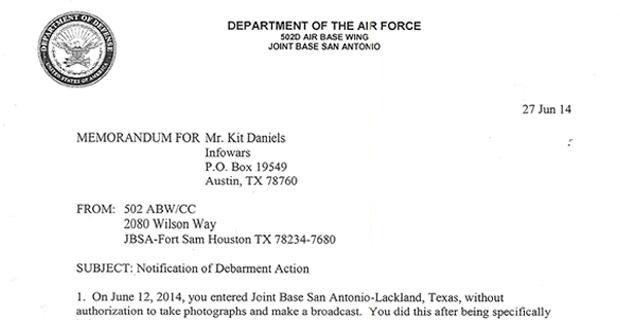 The Department of Defense has threatened me with imprisonment in response to our report on the illegal alien shelter at Lackland Air Force Base in San Antonio, Texas.

In a certified letter sent to Infowars, the Defense Department claims that I engaged in “unauthorized photography and broadcast” which were somehow “detrimental” to the “safety and security of the installation” even though the photos of Lackland’s illegal alien shelter, which is housing nearly 2,000 illegals at a cost to taxpayers of around $250 per immigrant per day, were taken outside the shelter and are clearly in the public’s best interest.

“You are hereby put on notice that should you make unauthorized entry into any of the Joint Base San Antonio (JBSA) installations in the future, a debarment order will be issued,” stated the letter, which added that further action could lead to imprisonment. 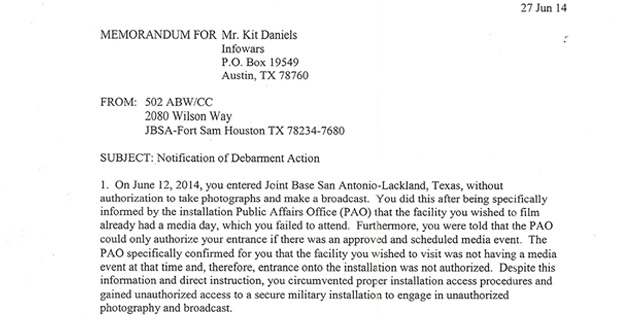 The first part of the letter. Click to enlarge and read in its entirety.

It would appear that DoD officials are somehow more threatened by a journalist reporting on illegal immigration than they are with illegal aliens using military accommodations at taxpayers’ expense while homeless vets wander the streets.

For one, it’s extremely unlikely that Lackland’s illegals have been fully screened for the “safety and security of the installation” since the Department of Health and Human Services, which is operating the shelter, admitted it does not bother to thoroughly check the backgrounds of immigrants.

And what about the safety and security of America? Multiple cases of swine flu (H1N1) have already been confirmed among illegal immigrants being detained in South Texas. The second part of the letter. Click to enlarge and read in its entirety.

“If someone is released and they are symptomatic, it could spread rapidly,” warned Chris Cabrera, the Vice President of the National Border Patrol Council #3307, who also said that barriers closing off quarantined areas at illegal alien shelters are “nothing more than a piece of yellow caution tape.”

Many of the diseases in Latin America are so rare in North America that doctors never check for them, so it’s theoretically possible for an incurable disease or even a disease unknown to science to come across America’s southern border and affect millions of Americans, especially since the Department of Homeland Security is transporting illegals all over America. 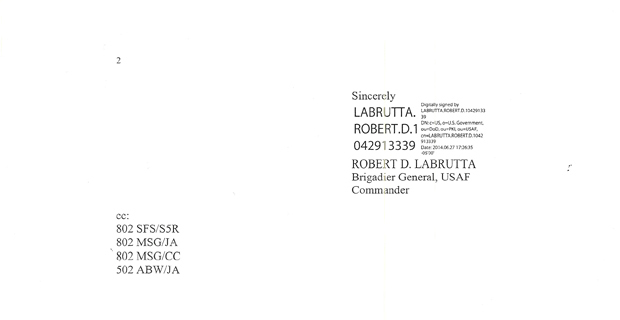 Page 2, the signature of the letter. Click to enlarge and read in its entirety.

It wouldn’t be the first time in America either as up to 80% of Native American populations diedbetween the 16th and 19th centuries due to European diseases they had no immunity to resist.

Also, considering that Lackland is one of many military bases across the country that are giving up resources to house illegals, these shelters are undoubtedly impacting national defense and should be well-known to the public.

Interestingly enough, when Infowars contacted the base’s public affairs office, we were told that the Health Department was directly responsible for the immigrant shelter and not Lackland, so it’s strange that the DoD would be so concerned about reporters taking photos of a shelter it does not claim responsibility for.

“Here at Lackland, we’re housing them [the illegal aliens] but we’re not really directly involved,” said one of the base’s public information officers. “It’s a Department of Health and Human Services thing.”

The officer also said that Lackland offers rare “media days,” but these so-called “media days” simply consist of a government official reading a press release to reporters who are banned from shooting video and taking photographs, rules which only serve the government and not the people it represents because officials can never be held in check by a bridled press.

This media blackout surrounding the intentional collapse of America’s border has also been extended to members of Congress, such as Rep. Jim Bridenstine (R-Okla.) who was prevented from accessing an army base in Oklahoma which is also housing illegal aliens.

“There is no excuse for denying a federal representative from Oklahoma access to a federal facility in Oklahoma where unaccompanied children are being held,” Bridenstine said in a statement following his visit to Ft. Sill near Lawton.

And journalists have likewise discovered that areas on the U.S. side of the border which were long open to the public are now being closed off.

Fortunately, the government’s attempts to suppress the details surrounding this orchestrated border collapse will only ensure that the truth will spread more widely than ever before.