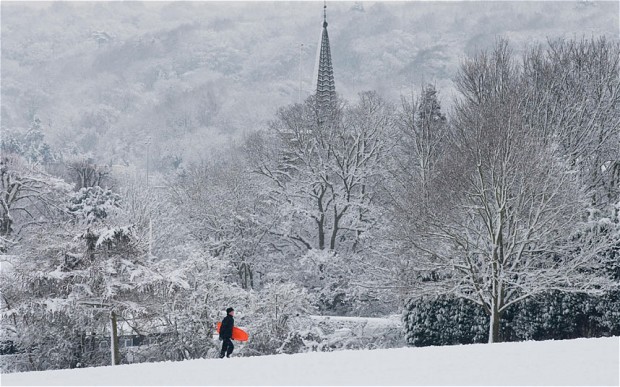 Children at Stalham Academy, near Great Yarmouth, were banned from looking at snow Photo: Andrew Crowley

A primary school has been criticised by parents after pupils aged eight and nine were banned from watching snow outside their classroom window.

Children were left disappointed after their teacher pulled down blinds to stop them being distracted by snow during a lesson.

Parents also claimed that pupils were stopped from touching the snow when they arrived at Stalham Academy near Great Yarmouth, Norfolk.

Charlotte Marsters, 39, said her nine-year-old daughter had been excited by last Monday's snowfall and was very disappointed when the blinds were closed.

She said: "It was so dark they had to put the lights on. They were stuck in all day as they weren't allowed to play in the snow - and there was only about 1cm."

Ms Masters said children had been "marshalled" into classrooms as snow fell and were stopped from even bending to touch it.

She claimed one boy was told off after he took a small amount of snow from a wall with a gloved hand.

Mother-of-six Shelly Betts, whose eight-year-old daughter Bethany is a pupil, said: "When she told me they'd shut the blinds I couldn't believe it - I was very upset.

"They're only little, and they only stay children for a short time. They could have turned the snow it into a science lesson instead of banning them from seeing it. By the time they came out of school it was all gone.

"I don't want it to end up with my children only knowing about snow from Christmas cards."

Julie Hollins, 30, who has an eight-year-old son at the school, said: "Stopping them from even seeing it fall is like a slap in the face for little children."

Valerie Moore, chief executive of the Rightforsuccess Academy Trust which runs the school, did not respond to a request for comment.

However, a message posted on the Facebook page said: "We acknowledge that snow is an unusual and exciting occurrence for everyone, especially children.

"The academy's playgrounds were extremely icy so it was felt that in the interest of safety and in line with our risk assessment under health and safety, that children were brought inside at the start of the day.

"The phrase 'marshalling' is not accurate to describe a notice board asking children to go inside, nor is it accurate in regards to the manner that children are brought into the Academy.

"Over the course of the day the ice had not cleared by break time on the Monday and sleet and snow showers prevented outdoor play at lunchtime.

"Having discussed the matter with the class teacher in question, she noted that the heavy snow fall was having an impact upon the learning of the children during one of her lessons so the blinds were closed to ensure that children focussed on their tasks in hand."

The school made headlines before Christmas when Stalham curate, the Rev Margaret McPhee, announced that father Christmas was not real during a school carol service, leaving some pupils upset. She later apologised.