Complete turnaround on attitudes of one year ago

In a complete 180 degree turnaround, a sizeable majority of Americans now want the government to engage in military action in Syria and Iraq, following the brutal beheading of an American journalist, and other stories of atrocities committed by ISIS terrorists.

A YouGov poll released this week, found that four times as many Americans now support US led military action than oppose it.

The survey notes that 63 percent of Americans back airstrikes in Syria, while 16 percent do not. Just one year ago, as the Obama administration campaigned for military action in Syria against President Bashar Assad’s troops, the numbers were almost exactly reversed, as 60 percent opposed military action with only 20 percent declaring support. 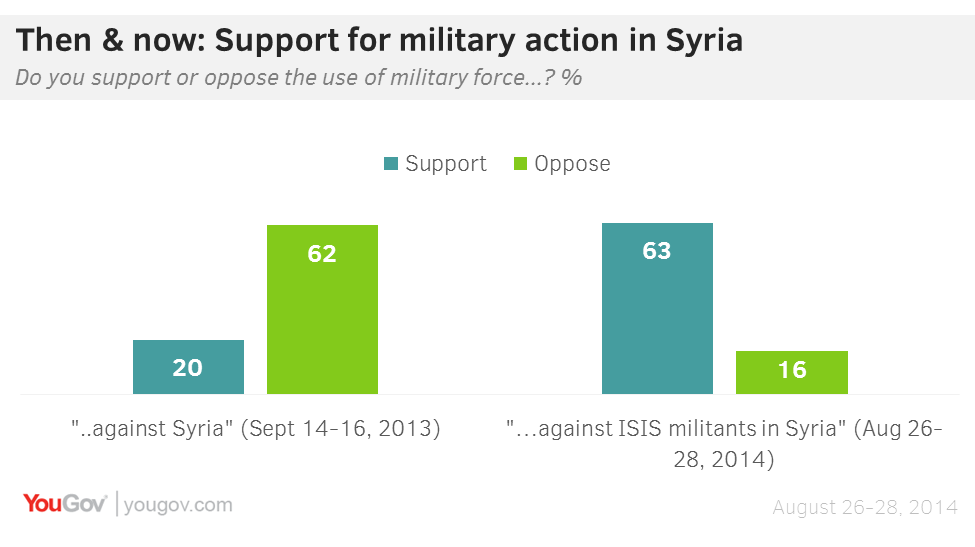 Ironically, any US military action in Syria will be sold on the exact opposite reasoning, that militant Islamic rebels are taking over the country. Last year, US airstrikes were proposed to help the rebels fighting against the Syrian government.

In addition, YouGov notes that “support for military action has increased significantly despite the fact that expectations of deeper US involvement remain the same.” This is due to the fact that the latest figures show 40 percent of Americans said that strikes would be the first step towards having US troops in Syria. In 2013, that figure was 45 percent, just a five point difference.

The flip in Americans’ attitudes comes in the wake of the James Foley beheading video being used by the government and the mainstream media as a poster child to reinvigorate support behind a military attack on Syria, almost exactly a year after a dubious chemical weapons attack was exploited for the same purpose.

As Infowars reported, top forensic experts have concluded that the alleged beheading was likely “staged” and that the footage in the clip does not show the execution of Foley. Despite this, the footage has continued to be paraded as a casus belli for expanding U.S. military operations. It seems that previous massive public and political opposition to America’s involvement in the region has now been offset.

In Iraq too, where support for military action has been consistently low and dwindling for a long period, a majority, 64 percent, now back airstrikes, with only 20 percent opposed. 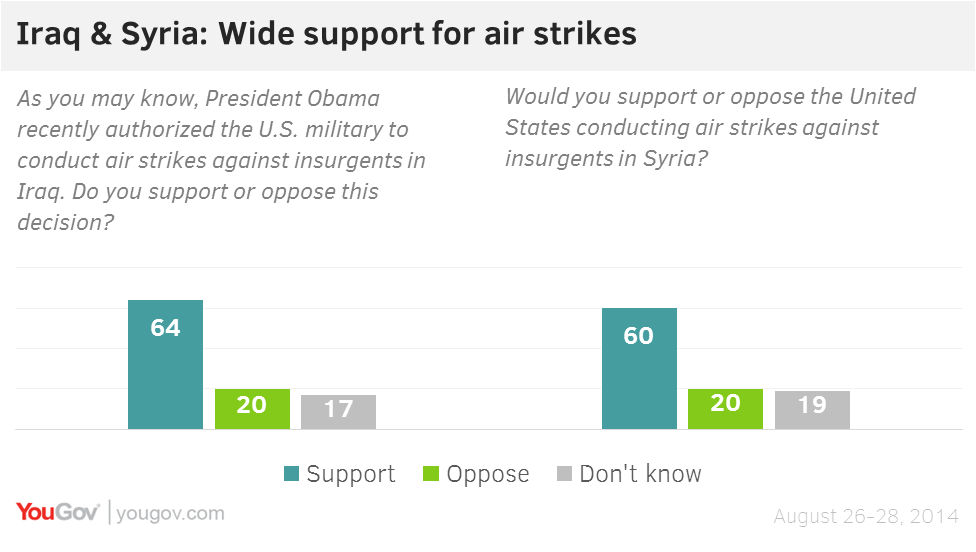 Over the weekend, the Obama administration green lighted airstrikes in Iraq under the War Powers Resolution, which gives presidents authorization for temporary military action. Democrat leaders, including Sen. Dianne Feinstein, head of the Senate Intelligence Committee, also openly declared their backing for military action on the weekend news network shows.