Despite engaging in a shouting match with Bibi Netanyahu before a congressional delegation in Jerusalem last month, the U.S. ambassador to Israel, Dan Shapiro, told The Times of Israel on Thursday the United States and Israel are on the same page. 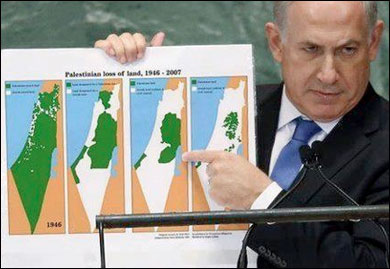 A photoshopped image of Netanyahu’s UN speech: the issue is not about Iran nuking Israel, but Israel maintaining its hegemonic status in the Middle East.

“We’re totally focused on the same goal, which is preventing Iran from acquiring a nuclear weapon. We’re in the closest possible consultations at the highest levels of our government,” Shapiro said after Netanyahu made his “red line” speech at the United Nations. “We’re absolutely focused on achieving that goal together. And we’ve been very well coordinated until now and I think we will remain very well coordinated.”

During the address, Netanyahu demanded the U.S. and the international community establish a red line that if crossed by Iran would result in an attack. The Israeli prime minister said the United States and Israel will attack “before Iran completes the second stage of nuclear enrichment where it’s a few months away or a few weeks away from amassing enough enriched uranium to make a nuclear weapon.”

On Friday, Russian Deputy Foreign Minister Sergei Ryabkov said there is no evidence Iran has enriched uranium above 20 percent. He said production in Natanz and Fordo is used to supply a research reactor in Tehran, not to weaponize the material.

“Bibi Bomb,” as Netanyahu is now known following his speech before the General Assembly, insists Iran has reached 70 percent enrichment. “It seems to me that he is the first one in the world to name such a number,” wrote Nahum Barnea, a columnist for Yediot Aharonot.

Following Netanyahu’s widely covered propaganda speech, Obama said Iran’s possession of a nuclear weapon would “threaten the elimination of Israel, the security of Gulf nations, and the stability of the global economy.” He said the United States “will do what we must to prevent” Iran from acquiring a nuclear weapon.

“We made very clear that we’re going to do everything we need to prevent Iran from acquiring a nuclear weapon. That includes having a military option on the table,” said ambassador Shapiro in response to a question regarding the American people supporting an attack on Iran.

“The necessary preparations have been taken to make sure that’s the case,” Shapiro added. “I’ll leave it at that rather than address public opinion.”

"The real truth of the matter is, as you and I know, that a financial element in the larger centers has owned the Government ever since the days of Andrew Jackson."