As the US government confirms that terrorists involved in the Benghazi, Libya US consulate attack were indeed the very militants funded, armed, and provided air support in last year’s bid to overthrow the government of Libya, yet another disturbing announcement has been made. Terror organization Mujahedeen e-Khalq (MEK) will be delisted by the US State Department in order to clear legal obstacles in the way of overtly arming and funding the terrorists in pursuit of a proxy war with Iran, the LA Times reported in their article, “U.S. to remove Iranian group Mujahedin Khalq from terrorist list.” 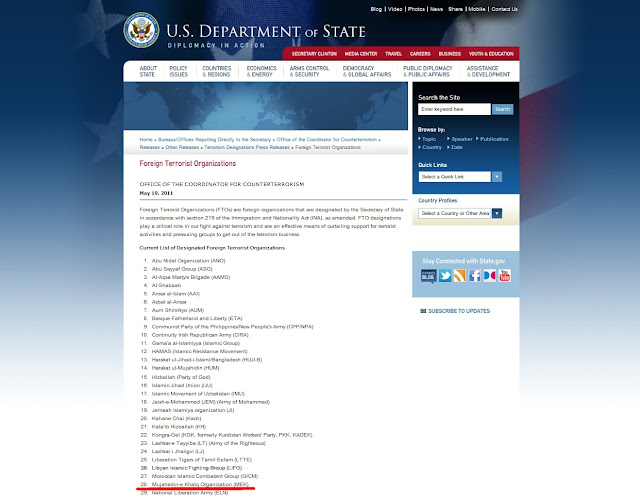 Image: MEK is just one of many terrorist organizations, that despite being listed by the US State Department as such, still receives weapons, training, cash, and political support from the US government. This is a pattern seen repeated in Libya and most recently in Syria – each case spun and excused with a myriad of lies wrapped in false, constantly shifting narratives.

Some current and former U.S. officials have called for arming the MEK to conduct attacks against Iran, which experts say could tip the United States and Iran closer to war.

The US Has Already Been Arming MEK For Years

The delisting of MEK is merely a technicality to make more overt arming and funding for the group possible. In reality, and despite being long recognized as a dangerous, extremist organization with both innocent Iranian and American blood on their hands, the US has been arming, training, and funding MEK for years, beginning under the Bush administration and continuing unabated under Obama.

Covert support for the US-listed terrorist group Mujahedeen e-Khalq (MEK) has been ongoing since at least 2008 under the Bush administration, when Seymour Hersh’s 2008 New Yorker article “Preparing the Battlefield,” reported  that not only had MEK been considered for their role as a possible proxy, but that the US had already begun arming and financing them to wage war inside Iran:

“The M.E.K. has been on the State Department’s terrorist list for more than a decade, yet in recent years the group has received arms and intelligence, directly or indirectly, from the United States. Some of the newly authorized covert funds, the Pentagon consultant told me, may well end up in M.E.K. coffers. “The new task force will work with the M.E.K. The Administration is desperate for results.” He added, “The M.E.K. has no C.P.A. auditing the books, and its leaders are thought to have been lining their pockets for years. If people only knew what the M.E.K. is getting, and how much is going to its bank accounts—and yet it is almost useless for the purposes the Administration intends.”

Seymore Hersh in an NPR interview, also claims that select MEK members have already received training in the US.

More recently, the British Daily Mail published a stunning admission by “US officials” that Israel is currently funding, training, arming, and working directly with MEK. The Daily Mail article states, “U.S. officials confirmed today that Israel has been funding and training Iranian dissidents to assassinate nuclear scientists involved in Iran’s nuclear program.” The article continues by claiming, “Washington insiders confirmed there is a close relationship between Mossad and MEK.”

In 2009, an extensive conspiracy was formulated within US policy think-tank Brookings Institution’s 2009 “Which Path to Persia?” report, proposing to fully arm, train, and back MEK as it waged a campaign of armed terror against the Iranian people.

In their report, they openly conspire to use what is an admitted terrorist organization as a “US proxy” (emphasis added):

“Perhaps the most prominent (and certainly the most controversial) opposition group that has attracted attention as a potential U.S. proxy is the NCRI (National Council of Resistance of Iran), the political movement established by the MEK (Mujahedin-e Khalq). Critics believe the group to be undemocratic and unpopular, and indeed anti-American.

In contrast, the group’s champions contend that the movement’s long-standing opposition to the Iranian regime and record of successful attacks on and intelligence-gathering operations against the regime make it worthy of U.S. support. They also argue that the group is no longer anti-American and question the merit of earlier accusations. Raymond Tanter, one of the group’s supporters in the United States, contends that the MEK and the NCRI are allies for regime change in Tehran and also act as a useful proxy for gathering intelligence. The MEK’s greatest intelligence coup was the provision of intelligence in 2002 that led to the discovery of a secret site in Iran for enriching uranium.

Despite its defenders’ claims, the MEK remains on the U.S. government list of foreign terrorist organizations. In the 1970s, the group killed three U.S. officers and three civilian contractors in Iran. During the 1979-1980 hostage crisis, the group praised the decision to take America hostages and Elaine Sciolino reported that while group leaders publicly condemned the 9/11 attacks, within the group celebrations were widespread.

Undeniably, the group has conducted terrorist attacks—often excused by the MEK’s advocates because they are directed against the Iranian government. For example, in 1981, the group bombed the headquarters of the Islamic Republic Party, which was then the clerical leadership’s main political organization, killing an estimated 70 senior officials. More recently, the group has claimed credit for over a dozen mortar attacks, assassinations, and other assaults on Iranian civilian and military targets between 1998 and 2001. At the very least, to work more closely with the group (at least in an overt manner), Washington would need to remove it from the list of foreign terrorist organizations.”

The latest lobbying effort to delist MEK, led by some of the most adamant proponents for the West’s “War on Terror” is simply the latest move in a long-ago decided conspiracy to build up an armed terrorist group with which to fight a proxy war against Iran. That the conspiracy has been dutifully carried out over the course of two presidencies indicates a continuity in agenda, divorced from the alleged agendas and ideologies of each respective presidency.

Image: Rudy Giuliani consorting with MEK’s political wing leader Maryam Rajavi in Paris, France. Giuliani is best known for his role playing a strong supporter for the “War on Terror” and his incessant fear mongering versus “Islamic extremists.” In real life, he coddles listed terrorist organizations in direct violation of US law and even lobbies for them.

MEK is a Listed Terror Organization for a Reason

The delisting, funding, arming, and training of MEK is an indefensible crime against humanity, standing in direct violation of both United States law, as well as international accords agreed upon to stem the state sponsorship of terrorism.

MEK has carried out decades of brutal terrorist attacks, assassinations, and espionage against the Iranian government and its people, as well as targeting Americans including the attempted kidnapping of US Ambassador Douglas MacArthur II, the attempted assassination of USAF BrigadierGeneral Harold Price, the successful assassination of Lieutenant Colonel Louis Lee Hawkins, the double assassinations of Colonel Paul Shaffer and Lieutenant Colonel Jack Turner, and the successful ambush and killing of American Rockwell International employees William Cottrell, Donald Smith, and Robert Krongard.

Admissions to the deaths of the Rockwell International employees can be found within a report written by former US State Department and Department of Defense official Lincoln Bloomfield Jr. on behalf of the lobbying firm Akin Gump in an attempt to dismiss concerns over MEK’s violent past and how it connects to its current campaign of armed terror – a testament to the depths of depravity from which Washington and London lobbyists operate.

To this day MEK terrorists have been carrying out attacks inside of Iran killing political opponents, attacking civilian targets, as well as carrying out the US-Israeli program of targeting and assassinating Iranian scientists. MEK terrorists are also suspected of handling patsies in recent false flag operations carried out in India, Georgia, and Thailand, which have been ham-handedly blamed on the Iranian government.

MEK is described by Council on Foreign Relations Senior Fellow Ray Takeyh as a “cult-like organization” with “totalitarian tendencies.” While Takeyh fails to expand on what he meant by “cult-like” and “totalitarian,” an interview with US State Department-run Radio Free Europe-Radio Libertyreported that a MEK Camp Ashraf escapee claimed the terrorist organization bans marriage, using radios, the Internet, and holds many members against their will with the threat of death if ever they are caught attempting to escape.

Clearly, all involved, from the Bush administration to Obama’s, are complicit in an overarching agenda to willfully arm terrorists to deploy against Iran. MEK’s history and even its current state is one of couching militant terrorism within the tenuous trappings of political activism – and provides a transparent comparison with which to use against Libyan and Syrian terrorists also armed, trained, funded, and supported by the West in pursuit of long since planned regime change.

Whether it is the US funding and arming Libyan Islamic Fighting Group (LIFG) terrorists in Libya and in Syria, or delisting the already heavily US-armed and funded MEK in Iraq to carry out attacks across the border against Iran, the West itself is the premier purveyor of state sponsored global terror.

It is support that originates not within the alleged political ideologies of “Neo-Cons” or the current “liberal-Democrat” president, but from corporate-financier interests, articulated within their think-tanks, and merely rubber-stamped and sold to the public by troupes of proxy politicians using false paradigms to manipulate public perception. It is a singular, continuous agenda that will carry forth no matter who is elected into office in 2012, 2016 or beyond. Until the balance of power can be shifted from the corporate-financier interests on Wall Street and in the City of London, back into the hands of the people and their communities, such agendas will continue on.

"Once the peoples of the world realize that there is nothing necessarily "normal" about their "normal life," they can begin to ask themselves the first and most important question: Are there ways of thinking, acting, and living that might be more satisfying and exciting than the ways we think, act, and live today?"