A World On The Verge Of War?

Here is a summary of where the world stands: -

- Unable to reach a compromise over the weekend, South Africa is now in an all out labor strike, with the police again firing rubber bullets at miners with lethal escalation guaranteed 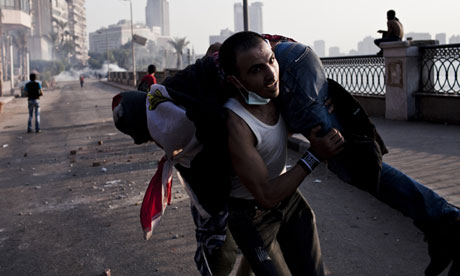 - Back from vacation, the once again penniless citizens of Spain, Greece, and Portugal have resumed protesting austerity

- US embassies attacked, in many cases with numerous casualties, in Egypt, Libya, Tunisia, Morocco, Sudan, Lebanon, India, Balgadesh, Indonesia, and others.

- Warships from more than 25 countries, including the United States, Britain, France, Saudi Arabia and the UAE, launching a military exercise in the Straits of Hormuz

- And finally, a potential catalyst to light this whole mess on fire, Iran’s Revolutionary Guard announcing that its troops are now on the ground in Syria.

Jafari’s statement is the first official acknowledgement that Iran has a military presence on the ground in Syria where an 18-month-old uprising has left tens of thousands dead.

Western countries and Syrian opposition groups have long suspected Iran has troops in Syria. Iran has denied this.

“A number of members of the Qods force are present in Syria but this does not constitute a military presence,” Iranian news agency ISNA quoted Jafari as saying at a news conference.

Qods is an IRGC unit set up to export Iran’s ideology. It has been accused of plotting attacks inside Iraq since the overthrow of Saddam Hussein.

Jafari did not indicate how many IRGC members were in Syria but said they were providing “intellectual and advisory help”.

The Islamic Republic has backed Syria’s President Bashar al-Assad since the crisis began and regards his rule as a key part of its axis of resistance against Israel and Sunni Arab states.

“I say specifically that if Syria came under military attack, Iran would also give military support but it … totally depends on the circumstances,” he said.

Next up: satellite photos somewhere “confirming” beyond a reasonable doubt that weapons of mass destruction are being prepared for usage, and a preemptive war is the only way to not only preserve peace, but to be awarded the Nobel prize in said activity.

What is perfectly obvious to anyone but the most jaded and biased, is that the West will use any opportunity of conflict escalation which in turn will send crude, and gas, prices soaring, to commence the launch of the Strategic Petroleum Reserve release, arguably at just the right time to push down gas prices, which as we showed on Friday have never been higher on this day in history. “Right time”, because any SPR release will have the short-term benefit of boosting Obama’s re-election chances even more, even if it means surging gas prices after the election.

The reality of course is that the bulk of upside pressure on commodity (crude and gas included) prices is as a result of the Fed and ECB’s recent monetization expansion and liquidity tsunami, which does the usual: soothes the symptoms for a few weeks, crushes volatility and creates the impression that all is well…. if only to lead to yet another far more grave outcome. And since there is now officially no limit much debt the Fed will monetize, there is so no limit on how high commodity prices will go.

So while in reality any war, supposedly one which is “regional” and “contained” will merely be a smokescreen to the central banks officially taking over ownership of the insolvent developed world, the likelihood is that a war will neither be “regional” nor “contained” as both countries that make up the axis of a future hard-backed currency, China and Russia, have already made it quite clear that any intervention by the US in regions they themselves consider strategic, such as the Senkaku Islands, Syria and/or Iran, will result in retaliation.

And retaliation by one or more rising superpowers to another fading superpower, will inevitably lead to yet another World War.

Needless to say, nobody could possibly foresee war as the outcome to the global depression ver 2.0: certainly not the Princeton historian who will be, more than anyone else, responsible for it.

"To live in the presence of great truths and eternal laws, to be led by permanent ideals - that is what keeps a man patient when the world ignores him, and calm and unspoiled when the world praises him."