The Libyan Islamic Fighting Group (LIFG) currently arming, funding, and commanding entire brigades of the so-called “Free Syrian Army” (FSA), is designated an Al Qaeda affiliate by the United Nations pursuant to resolutions 1267 (1999) and 1989 (2011), in addition to being listed by both the US State Department and the UK Home Office (page 5, .pdf) as a foreign terrorist organization and a proscribed terrorist organization respectively. 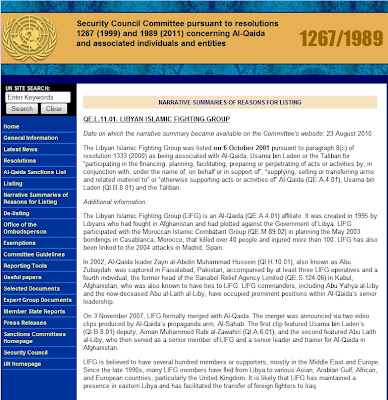 This means that the United States, the UK, NATO, and the Gulf State despots of Saudi Arabia and Qatar are knowingly and willfully funding, arming, and politically backing designated affiliates of Al Qaeda contrary not only to US and British anti-terror legislation, but contrary to numerous UN resolutions as well. Western and Gulf State support of the FSA constitutes state sponsorship of terrorism.

Image: In Libya – starting with the blue flak-jacketed Paul Conroy of the British press, standing to his left with a rifle slung across his chest is LIFG terrorist Mahdi al-Harati, now leading FSA brigades in Syria, to his left wearing green camouflage fatigues is Abdul Hakim Belhaj, LIFG commander who had visited the Turkish-Syrian border pledging weapons, cash, and fighters to FSA militants in November 2011. That same month, some 600 LIFG terrorists from Libya would enter Syria and begin militant operations. Al Qaeda was a creation of Western geopolitical interests, and to this day continues to serve these interests. The “War on Terror” is a fraud.

Should the UN fail to enforce its own resolutions, while playing host to further sanctions and considerations for military intervention against the Syrian government who is in fact resisting an international terrorist organization, it will have entirely resigned its legitimacy and authority as nothing more than a tool of Western corporate-financier interests.  It will also highlight the necessity to expediently remove and replace it – ideally with a system that represents a multipolar balance of global power maintained by sovereign nation-states rather than untenable supranational governance.

As previously reported (and here), both British and American journalists have clearly identified and documented the presence of foreign fighters with militant extremist ties pouring over the Turkish-Syrian border, most recently in an attempt to overrun the northern Syrian city of Aleppo. CNN, whose Ivan Watson accompanied FSA terrorists over the Turkish-Syrian border and into Aleppo revealed that indeed foreign fighters were amongst the militants. It was admitted that:

Meanwhile, residents of the village where the Syrian Falcons were headquartered said there were fighters of several North African nationalities also serving with the brigade’s ranks.

A volunteer Libyan fighter has also told CNN he intends to travel from Turkey to Syria within days to add a “platoon” of Libyan fighters to armed movement.

On Wednesday, CNN’s crew met a Libyan fighter who had crossed into Syria from Turkey with four other Libyans. The fighter wore full camouflage and was carrying a Kalashnikov rifle. He said more Libyan fighters were on the way.

The foreign fighters, some of them are clearly drawn because they see this as … a jihad. So this is a magnet for jihadists who see this as a fight for Sunni Muslims. 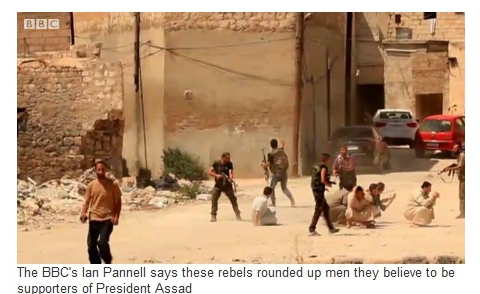 Image: From BBC’s Ian Pannell who also accompanied terrorists across the Turkish-Syrian borderand into Aleppo, he reported young men “suspected” of being “Shabiha” being rounded up as the FSA “seeks revenge.” BBC fails categorically to explain how NATO-backed terrorists can “liberate” a city that is admittedly pro-government – but it appears it will be done through terrorism, brutality, mass murder, and intimidation.

Foreign Policy magazine in an article titled, “The Syrian Rebels’ Libyan Weapon,” has gone as far as writing a two page profile on Libyan Islamic Fighting Group (LIFG) commander Mahdi al-Harati and his role in leading the so-called “Free Syrian Army.” Also recently, the Council on Foreign Relations, a premier Fortune 500-funded US think-tank, wrote in their article, “Al-Qaeda’s Specter in Syria,” that:

“The Syrian rebels would be immeasurably weaker today without al-Qaeda in their ranks. By and large, Free Syrian Army (FSA) battalions are tired, divided, chaotic, and ineffective. Feeling abandoned by the West, rebel forces are increasingly demoralized as they square off with the Assad regime’s superior weaponry and professional army. Al-Qaeda fighters, however, may help improve morale. The influx of jihadis brings discipline, religious fervor, battle experience from Iraq, funding from Sunni sympathizers in the Gulf, and most importantly, deadly results. In short, the FSA needs al-Qaeda now.”

Clearly then, US, British, NATO, and Gulf State aid is being sent to the FSA whose ranks are admittedly filled by Al Qaeda.

Also, to be clear, the Libyan Islamic Fighting Group (LIFG) is in fact an affiliate of Al Qaeda with its commanders having occupied the highest echelons of Al Qaeda’s command structure and having participated in every combat engagement Al Qaeda has conducted since its inception via US-Saudi cash and arms in the mountains of Afghanistan in the 1980′s. This was documented meticulously in the US Army’s West Point Combating Terrorism Center report, “Al-Qa’ida’s Foreign Fighters in Iraq.”

Foreign Policy’s admission of al-Harati’s role in organizing and leading the FSA in Syria, and the inclusion of Libyan terrorists in his brigade are by no means the only role LIFG is playing in the Syrian violence. LIFG commander Abdul Hakim Belhaj had visited the Turkish-Syrian border in late 2011 pledging Libyan arms, cash, and fighters to the FSA – with the nation of Libya itself having already become a NATO-created terrorist safe-haven.

It is clear that LIFG, and by implication Al Qaeda, is playing a significant role in the violence in Syria, not only undermining the narrative of the unrest being an “indigenous” “pro-democracy uprising,” but also implicating foreign nations who are funding and arming militants as state sponsors of terrorism.

Included amongst these state sponsors of international terrorism are Turkey, Saudi Arabia, Qatar, and the Hariri faction in northern Lebanon, as well as the NATO-installed government of Libya. This also includes both the United States, who is admittedly providing cash and equipment for the FSA as well as coordinating efforts to arm militants, and now the UK once again with their latest announcement.

A similar scenario unfolded in Libya, where LIFG terrorists were likewise carrying out a campaign of nationwide genocide with NATO providing air support. Similarly, by funding, arming, and coordinating acts of violence with LIFG fighters, NATO, and in particular, France, England, and the United States, were guilty of violating both their own respective anti-terrorism legislation, as well as international provisions against terrorism.

Tony Cartalucci is the writer and editor at Land Destroyer

"Perhaps the time has come to formulate a moral code which would govern our relations with the great creatures of the sea as well as those on dry land. That this will come to pass is our dearest wish."