You don’t bomb a “captured” city

Each NATO warplane that passes over Libya’s coast and releases its ordnance upon the city of Tripoli is a glaring reminder that not only have the NATO-backed rebels failed to take the city, but the fighting there is beyond their ability to face without constant air support. As each bomb tears through Tripoli’s already NATO-battered infrastructure – most recently destroying a fire station in the Abu Salim district – the world is given daily affirmations of just how duplicitous and premature NATO’s desperate claims of “victory” were, made now nearly a week ago. To add injury to insult, UK’s Foreign Secretary William Hague was imploring South Africa to release funding to NATO’s proxies in Benghazi and suggested that failing to do so would be “risking a humanitarian disaster.” Hague has not yet explained how the persistent aerial bombardment of a heavily populated city isn’t already causing a verified humanitarian disaster. 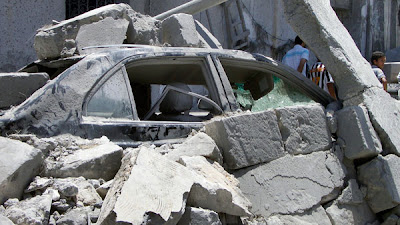 Photo: The rebels, led on ground by NATO special forces and protected by NATO planes in the air have still failed to take Tripoli after a week of fighting. Attempts to seize other cities still under Libyan government control are also significant tactical failures. The media, unable to point to a victorious rebel government seated in Tripoli is now attempting to sell the “chaos” angle – that combat is degenerating into genocide, in hopes the world will beg for a stabilization force. The only problem is that “genocidal” rebels are led, armed, trained, and organized by NATO officers on the ground.

There are now reports that NATO’s Al Qaeda brigades have been stalled before entering the coastal cities of Sirte and Bin Jawad, both lying between Benghazi and Misrata. In fact, by reading between the rhetoric, we see that the rebels have not only failed to achieve anything beyond the most symbolic of victories amidst immense chaos sown throughout Tripoli, they are in fact in a more tenuous position than ever before, with their forces stretched in multiple locations facing an entrenched Libyan army on multiple fronts.

By claiming victory while conducting daily air strikes upon a “captured city,” for those that are able to put the pieces together, NATO exposes a tenuous grip on a bungled drawn out campaign. Of course there is no possible way NATO believed Libya could be taken over within days, not weeks, and must be acutely aware that even if Tripoli fell tomorrow – which it most likely won’t – there will still be entire cities under Libyan government control along with Libya’s vast southern interior. Occupation was NATO’s true endgame from the beginning, waiting only for the proper pretext to begin landing troops on the ground. Getting that pretext has proven to be difficult.

Occupation cannot begin until either Benghazi’s terrorist leaders are able to squat in Tripoli long enough to call in NATO forces for assistance, or if NATO can create enough chaos, murder, and mayhem to get the “international community” to beg for a “stabilization force.” However it appears that the rebel forces are incapable of producing either result without NATO’s constant bombardments from overhead, betraying media reports that “Tripoli has fallen” or that NATO has achieved any sort of victory.

AP reported what they claim were rebels binding and executing activists who erected a tent near Bab al-Aziziya compound as a sign of solidarity with Qaddafi. Such a report, if true, would certainly seem like the beginnings of the genocide geopolitical analysts like Dr. Webster Tarpley had predicted if Benghazi terrorists ever reached Tripoli. NATO perhaps hopes this will be the catalyst it needs to sway Western political camps resistant to the idea of a “stabilization force.” There is one complication however.

France, the US, UK, and Qatar have all admitted they have special forces on the groundleading, assisting, arming, and training the rebels. Any chaos or atrocities attributed to these rebels would then directly implicate NATO’s own forces leading them. NATO’s premature victory celebration has turned into humiliation mired by ineffectual rebels on the ground, exposed lies, and a public now aware that Western special forces are in fact leading the unpredictable, brutal rebels.

It is up to the alternative media to expose these facts ad infinitum so that NATO is unable to sell their lies about achieving victory or portraying the rebels as “murderous loose cannons” requiring NATO’s intervention. Of course there is the concerted attempt to repackage February’s verified lies regarding Qaddafi’s alleged atrocities against civilians, coupled with the classical feigned fears of “WMDs,” and use this as a pretext to land troops. These lies too must be vigorously exposed, forcing NATO to either continue its tactical stalemate until its September deadline or forcing it to continue destroying its reputation and exposing its true criminal agenda before the world as it ham-handedly stumbles through the finish line.

While NATO and its corporate sponsors believe a victory in Libya will pave the way for operations in Syria and beyond, the globalists and their propaganda machine have never taken a beating as badly as they have in Libya, a nation of only six million people. Activism, informing others, and boycotting the Fortune 500 corporations lurking behind these wars does indeed make a difference and are things we can all do even just 10 minutes a day.

"Some of the biggest men in the United States, in the field of commerce and manufacture, are afraid of something. They know that there is a power somewhere so organized, so subtle, so watchful, so interlocked, so complete, so pervasive, that they had better not speak above their breath when they speak in condemnation of it."