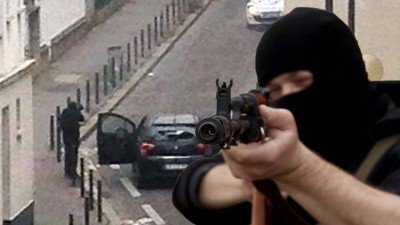 Corroborating claims by French security agencies, a bizarre interview conducted just before the death of terror suspect Chérif Kouachi reveals that he had been in Yemen and in direct contact with none other than Anwar Al Awaki – the notorious Al Qaeda leader allegedly killed in a drone strike in Yemen in 2011.

“Anwar al-Awlaki – the radical spiritual leader linked to several 9/11 attackers, the Fort Hood shooting, and the attempted Christmas Day bombing of an airliner - was a guest at the Pentagon in the months after 9/11, a Pentagon official confirmed to CBS News. 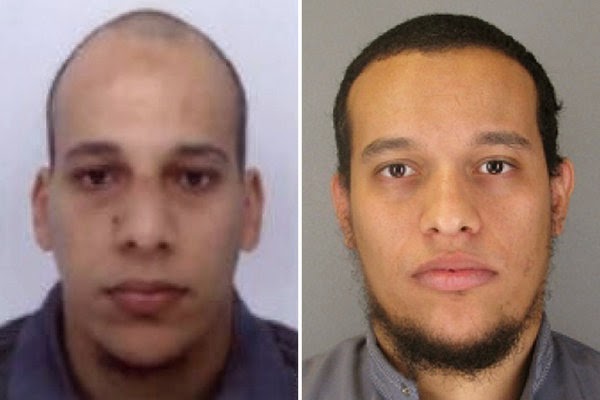 The Kourachi Brothers (image above) were arrested twice for terrorism, convicted and imprisoned for terrorism, having met senior leadership of Al Qaeda, having trained with and fought alongside Al Qaeda. French intelligence would – 6 months ago – deem the dangerous duo a “low risk.” Six months also happens to be the perfect time frame within which they could plan, fund, and begin executing their grand finale.Are we to believe it is a coincidence French intelligence turned the spotlight off just in time for them to piece together the worst terror attack in France in decades? Who is it French intelligence considers “high risk” and isn’t immediately arresting?

We are just telling you we are the defenders of the prophet and that I Chérif Kouachi have been sent by Al Qaida of Yemen and that I went over there and that Anwar Al Awaki financed me.

Not only was Anwar Al Awaki a senior leader in Al Qaeda, he also infamously spent dinner with top brass at the Pentagon shortly after the September 11, 2001 attacks in Washington, New York, and over Pennsylvania.

CBS News would report in their article, “Qaeda-Linked Imam Dined at Pentagon after 9/11,” that:

Anwar al-Awlaki – the radical spiritual leader linked to several 9/11 attackers, the Fort Hood shooting, and the attempted Christmas Day bombing of an airliner – was a guest at the Pentagon in the months after 9/11, a Pentagon official confirmed to CBS News.

Awlaki was invited as “…part of an informal outreach program” in which officials sought contact “…with leading members of the Muslim community,” the official said.At that time, Awlaki was widely viewed as a “moderate” imam at a mosque in Northern Virginia.

At the same time, the FBI was also interviewing Awlaki about his contacts with three of the 9/11 attackers – Nawaf al-Hazmi, Khalid al Midhar and Hani Hanjour – who were all part of the crew of five that hijacked the American Airlines jet that hit the Pentagon. 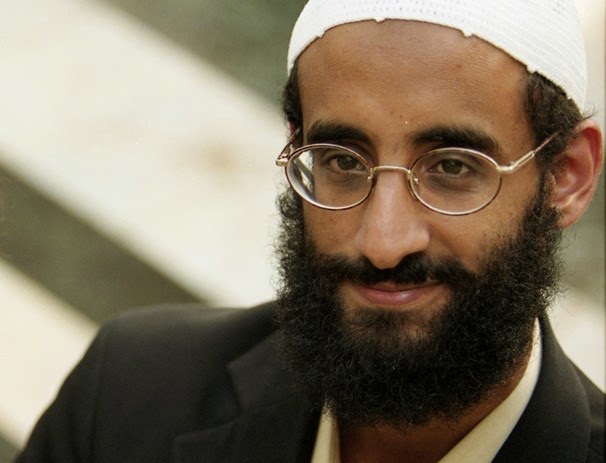 Image: Just another coincidence… Senior Al Qaeda leader Anwar Al Awlaki was clicking glasses together at the Pentagon with American military brassjust months after the 9/11 attacks in 2001. Also, “coincidentally,” he had in fact met at least one of the several alleged hijackers. He also, just before being liquidated by a US drone attack in 2011, allegedly funded the terror cell responsible for the recent Paris shootings.

Indeed, Anwar Al Awaki would admit to having met Hazmi – in yet another incident the general public is supposed to believe is simply an astonishing coincidence.

The list of “coincidences” and “accidents” is so far impressive and include the following:

1. French authorities arrested and imprisoned Chérif Kouachi in 2005 for terrorism. He would be released in 2008 after sentencing was suspended for “time served,” this despite evidence suggesting Kouachi may have even gone as far with his plot as travel to Yemen. Slate Magazine would report in their article, “The Details of Paris Suspect Cherif Kouachi’s 2008 Terrorism Conviction,” that:

Kouachi was arrested in January 2005, accused of planning to join jihadists in Iraq. He was said to have fallen under the sway of Farid Benyettou, a young “self-taught preacher” who advocated violence, but had not actually yet traveled to Iraq or committed any acts of terror. Lawyers at the time said he had not received weapons training and “had begun having second thoughts,” going so far as to express “relief” that he’d been apprehended.

2. Kouachi and brother Said would be implicated in another terrorist plot again in 2010 but were not prosecuted due to a lack of evidence. The BBC in their report titled, “Charlie Hebdo attack: Suspects’ profiles,” would state:

In 2010 Cherif Kouachi was named in connection with a plot to spring another Islamist, Smain Ait Ali Belkacem, from jail – a plot hatched by Beghal, according to French anti-terror police.

Belkacem used to be in the outlawed Algerian Islamic Armed Group (GIA) and was jailed for life in 2002 for a Paris metro station bombing in 1995 which injured 30 people.

Said Kouachi, 34, was also named in the Belkacem plot, but the brothers were not prosecuted because of a lack of evidence.

A U.S. official says the United States was given information from the French intelligence agency that Said Kouachi traveled to Yemen as late as 2011 on behalf of the al Qaeda affiliate there. Once in Yemen, the older brother of the two received a variety of weapons training from al Qaeda in the Arabian Peninsula (AQAP) — the affiliate in Yemen — the official said, including on how to fire weapons. It is also possible Said was trained in bomb making, a common jihadist training in Yemen. Two other U.S. officials confirmed that information about the Yemeni travel was passed to the U.S. from French intelligence agencies.

In addition, French Justice Minister Christiane Taubira told CNN’s Christiane Amanpour in an interview broadcast on CNN International that one of the brothers traveled to Yemen in 2005. Taubira would not say which brother.

Admissions that one of the brothers had traveled to Yemen in 2005, suggests the possibility he may indeed have received weapons training from Al Qaeda before his arrest and imprisonment later that same year.

4. It was reported that the brothers then fought in Syria before returning last summer, approximately 6 months ago. USA Today would report in an article titled, “Manhunt continues for two French terror suspects,” that:

The brothers were born in Paris of Algerian descent. Cherif was sentenced to three years in prison on terrorism charges in May 2008. Both brothers returned from Syria this summer.

5. Also about 6 months ago,  French intelligence decided the suspects’ serial offences along with their direct contact with Al Qaeda – including the receiving of terrorist training and battlefield experience fighting along side them in Syria – were “low risk” cases and therefore not worthy of their attention.

Astoundingly, UK’s Daily Mail would report in their article, “Revealed: Police stopped watching Paris killers six months ago after terror cell of kosher deli attacker and his crossbow jihadi wife – who has fled to Syria – were deemed ‘low-risk’,” that:

The world’s most wanted female terrorist has fled to Syria, it was revealed last night – as police admitted they stopped surveillance on her deadly Parisian cell six months ago because they were deemed ‘low-risk’.

The Daily Mail would go on to report on other cell members including Amedy Coulibaly, also killed by police during the recent shootings and attacks in Paris – also a notorious serial offender, known terrorist, and also previously arrested, convicted, and sentenced to prison for terrorism.

“Who decided this cell was “low risk” six months ago? That is probably where the French people should begin searching for justice – if justice is in fact what they seek.”

Six months, coincidentally, is also about the typical length (6-10 months) of security and intelligence “sting operations” targeting terrorists. It provides an appropriate time frame within which an event like the recent attacks could have been planned, funded, and eventually carried out. The public is expected to believe this obvious terror cell who had been in and out of prison for terrorism over the course of a decade and in direct contact with Al Qaeda, was suddenly dropped from the attention of French intelligence just in time for them to carry out their most spectacular crime to date?

Who decided this cell was “low risk” six months ago? That is probably where the French people should begin searching for justice – if justice is in fact what they seek.

Europe Has Been Here Before

Unfortunately, these “coincidences” and “accidents” are not coincidences and accidents at all. They fit an obvious pattern of staged provocations within the context of an intentionally engineered “strategy of tension,” identical but scaled up from what NATO was exposed to have committed during the Cold War as part of its “stay behind networks,” more commonly known as “Operation Gladio.”

Indeed, if NATO could carry out attacks during the Cold War, targeting Western Europeans in deadly brutality designed to appear as the work of NATO’s enemies, why would NATO now be suddenly excused from the investigation as a prime suspect? With the “coincidences” and “accidents” described above, those occupying the highest of France’s political, military, and intelligence offices, should be removed, tried, and imprisoned for criminal negligence at the very least.

As the puzzle pieces continue to fit together, the picture that appears is one of brazen, intentional provocation either to divide society at home, or wage war abroad, or both. And as this picture comes into focus, the rhetoric designed to distract the public from seeing it will reach a fevered pitch.

"The man who fears no truth has nothing to fear from lies."