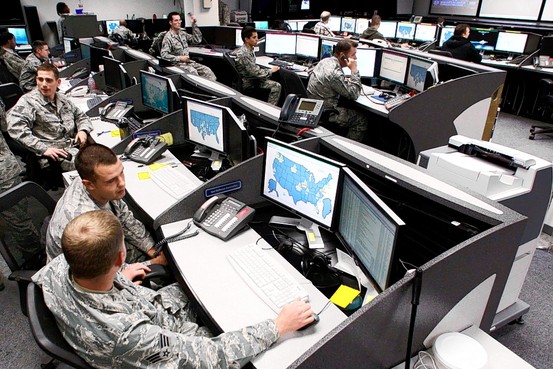 The Pentagon has announced that computer intrusions from abroad are to be considered acts of war against the United States and will be answered with conventional military force.

“If you shut down our power grid, maybe we will put a missile down one of your smokestacks,” a military official told The Wall Street Journal. In part, the Pentagon intends its plan as a warning to potential adversaries of the consequences of attacking the U.S., according to the Journal.

The Pentagon document is 30 pages in its classified version and 12 pages in the unclassified one. It concludes that the Laws of Armed Conflict are applicable in cyberspace as in traditional warfare.

The Pentagon established a new command last year, headed by Gen. Keith B. Alexander, director of the NSA, to consolidate military network security and attack efforts. Alexander told the Washington Post last November that the new outfit wants maneuvering room to mount what he called “the full spectrum” of operations in cyberspace.

The NSA announced its ambitious cyber security plan last year. Dubbed “Perfect Citizen,” it is designed to detect cyber assaults on private companies and government agencies running such critical infrastructure as the electricity grid and nuclear-power plants, according to the New York Times.

According to the Post, offensive actions may include shutting down part of an opponent’s computer network to head off a cyber-attack or changing a line of code in an adversary’s computer to render malicious software harmless. They are operations that destroy, disrupt or degrade targeted computers or networks, the newspaper reported.

Alex Jones talked with RT about the Pentagon’s cyber army.

The United States and Israel apparently employed this doctrine when they inserted the Stuxnet worm on a computer network associated with Iranian nuclear facilities. Iran had not attacked the United States or Israel, thus demonstrating that U.S. cyber warfare efforts against official enemies are not limited to offensive capability.

Since at least 2003, the Pentagon has considered cyberspace a battlefield. A Pentagon document entitled the Information Operation Roadmap was released to the public after a FOIA request by the National Security Archive at George Washington University in 2006.

On October 30, 2003, then Secretary of Defense Donald Rumsfeld signed a secret order for the classified 74-page directive. “DoD’s ‘Defense in Depth’ strategy should operate on the premise that the Department will ‘fight the net’ as it would a weapons system,” the report states.

The reported attacks on the Pentagon’s computer network have served to further boost the impression that crafty enemies are at war in cyberspace with the United States. It provided an impetus to attack official enemies. “Recent attacks on the Pentagon’s own systems – as well as the sabotaging of Iran’s nuclear program via the Stuxnet computer worm – have given new urgency to U.S. efforts to develop a more formalized approach to cyber attacks,” writes the Journal.

The Pentagon has publicized a number of alleged attacks, including “the most significant breach of U.S. military computers ever,” a 2008 episode in which a foreign intelligence agent used a flash drive to infect computers, including those used by the Central Command in overseeing combat zones in Iraq and Afghanistan, the New York Times reported last August.

In May of 2010, Richard Clarke, a former adviser to both Bill Clinton and George W. Bush, warned that the United States should prepare for a cyber attack that he claims could cause destruction on the scale of 9/11 in less than 15 minutes.

Prior to the announcement by the Pentagon today, major defense contractor Lockheed Martin reported over the weekend that its computer network was infiltrated by shadowy adversaries.

“Officials had no information on the origin on the attack, but one of the US diplomatic cables released by the WikiLeaks website suggested that China had jumped ahead of the US when it came to cyber-espionage,” The Telegraph reported on Saturday, two days before the Pentagon announcement.

The government and the corporate media have hyped the marginal threat of computer attacks over the last few years.

In late February of 2010, CNN rolled out a slick propaganda presentation called “Cyber Shockwave” that posited a cyber attack on the United States. The aired scenario was created by former CIA Director, General Michael Hayden, and the co-chairs of the 9/11 Commission, former Rep. Lee Hamilton (D-IN) and former Gov. Thomas Kean (R-NJ). Other government insiders and establishment types participated, including former Secretary of Homeland Security Michael Chertoff and former CIA director John McLaughlin. The scenario sketched out a dire scenario of knocked out power grids and the prospect of the United States being pitched into the Dark Ages.

“How should the government deal with the threat?” we asked at the time. “Federalize the National Guard to deal with unruly mobs freaking out over the loss of electricity. Nationalize utility companies so the NSA and the government get electricity. The participants also recommended new powers be granted to the president. Not surprisingly, they declared the president has the authority to take unprecedented action against the states and the private sector under the Constitution.”

In April of last year, CIA director Leon Panetta said that the next “Pearl Harbor” is likely to be an attack on the United States’ power, financial, military and other internet systems, the Sacramento Press reported. Panetta said the United States faces thousands of cyber attacks daily on its internet networks. The attacks are originating in Russia, China, Iran and from even hackers.

The government and the corporate media are overplaying the threat of a cyber attack for political reasons. It is a key component of an effort to install a sprawling surveillance grid.

“It is alarming that so many people have accepted the White House’s assertions about cyber-security as a key national security problem without demanding further evidence. Have we learned nothing from the WMD debacle? The administration’s claims could lead to policies with serious, long-term, troubling consequences for network openness and personal privacy,” writes Evgeny Morozov for the Boston Review. “Much of the data are gathered by ultra-secretive government agencies — which need to justify their own existence — and cyber-security companies — which derive commercial benefits from popular anxiety. Journalists do not help. Gloomy scenarios and speculations about cyber-Armageddon draw attention, even if they are relatively short on facts.”

The supposed cyber threat now hyped by the Pentagon is not limited to foreign adversaries. Last October, Obama instructed the Pentagon to attack “cyberthreats” within the United States. “The Obama administration has adopted new procedures for using the Defense Department’s vast array of cyberwarfare capabilities in case of an attack on vital computer networks inside the United States, delicately navigating historic rules that restrict military action on American soil,” the New York Times reported.

In short, Obama gave the Pentagon orders to attack a supposed cyber threat within the United States.

"We must become the change we want to see..."