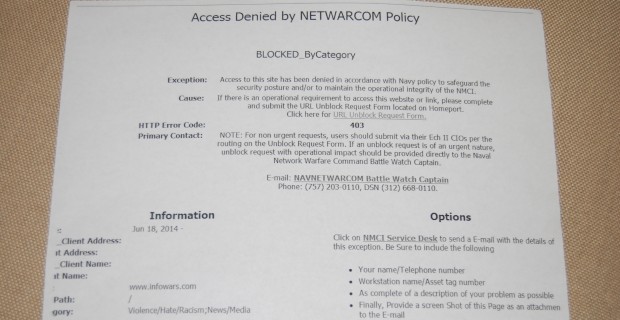 The U.S. Military has blocked Infowars.com, with active duty personnel contacting us to confirm that the website is inaccessible to over 700,000 servicemembers worldwide having been labeled “violence/hate/racism.”

A servicemember forwarded the above print out which shows that the Navy Marine Corps Intranet (NMCI), which serves “more than 707,000 Sailors, Marines and civilians in 620 locations in the continental United States, Hawaii, and Japan, making it the largest internal computer network in the world,” is censoring Infowars.com in order to “safeguard the security posture and/or to maintain the operational integrity of the NMCI.”

The message is entitled “Access Denied by NETWARCOM Policy,” with the block being approved by the “Naval Network Warfare Command Battle Watch Captain.” Click here for an enlargement showing the message.

To emphasize, the block is not being imposed by an external web filtering software program used by the Navy, but by the Navy’s own private intranet system. The NMCI is so vast that it is second only to the public Internet in size, comprising 4,100 servers that handle over 2.3 petabytes of data.

We also received the following email from a separate active duty member of the U.S. Military confirming the block.

“Hello, I visit infowars every day @ home and at work to keep up to date with latest news that I cannot find in the mainstream media. I am active duty military and my fellow comrades and I follow infowars and which usually ends up in discussion. Just recently my comrades and I have noticed the Infowars website has now been blocked on all our computers. I believe its another attempt for the govt to censor out the truth. I feel this story should be shared and at least infowars should be notified. As for my comrades and I we feel like its another attempt to take our freedoms which we fight for. Thank you for everything you do. Let the truth be told and never quit. If there is anything we can do please let us know.”

Yesterday we reported on how the Blue Coat corporate web filtering service, which is used by many large companies, had blocked Infowars.com by placing it in the same category under the banner of “violence/hate/racism.” The ban was lifted following complaints.

It goes without saying that Infowars.com is an independent news website and has nothing whatsoever to do with advocating violence, hate or racism, unless of course you define “hate” as being adversarial to government corruption and abuse.

It wouldn’t be a stretch to suggest that Infowars’ aggressive recent coverage of the VA scandal may have been a primary reason for the upper echelons of the U.S. Military imposing the ban.

Infowars routinely receives emails from users who are unable to access the website because it has been blocked by filters used by government facilities, transport hubs, large corporations and other institutions.