Understanding how the power structure thinks, and how it intentionally manipulates the emotions of the masses, is key to overcoming and rolling back totalitarian ambitions. I have spent the last few posts talking about how instilling fear throughout the general populace is one of their primary tactics. Indeed, to borrow a term from Glenn Greenwald, “fear-manufacturing” has been in overdrive across the Five Eyes nations over the past several weeks.

In the UK, we saw it used to convince elderly Scots to overwhelming vote against independence, thus swaying the result decisively to the NO side. In the USA, we have seen it used to drum up support for another pointless war in the Middle East, which will benefit nobody except for the military/intelligence-industrial complex.

While these examples are bad enough, nowhere is fear being used in a more clownish and absurd manner to strip the local citizenry of its civil liberties than in Australia. This should come as no surprise, considering that nation’s Prime Minister is a certified raging lunatic. nation’s Prime Minister is a certified raging lunatic. In fact, Tony Abbott is such a little nazi in disguise, I dedicated a post to him back in June titled: Video of the Day – Meet Australia’s Creepy Prime Minister, Tony Abbott.

Remember, when the power structure sees a meme is working they double and triple down on it. With the beheading videos effectively pushing the American public back into a post-9/11 fetal position, it became clear that the fear of “beheadings” is enough to send the Western public into a total panic state. Then, suddenly a plot emerges that ISIS related terrorists were planning to publicly behead an Australian citizen in the middle of Sydney. As usual, mainstream media rushed to scare the shit out of everyone. NBC reported the following:

An apparent plot to publicly behead a random civilian on the streets of Sydney in support of ISIS sparked counter-terrorism raids backed by nearly 1,000 Australian police, officials said Thursday. Australian Federal Police said 15 people were arrested in relation to “serious terrorism-related offenses” in a massive pre-dawn operation. Prime Minister Tony Abbott told reporters that the raids came after intelligence showed an Australian occupying a “quite senior” rank within ISIS was making “direct exhortations” for supporters back home to kill. When asked about reports that those detained had been planning to publicly behead a random individual, “that’s the intelligence we received,” Abbott said. “This is not just suspicion, this is intent, and that’s why the police and security agencies decided to act.”

Glenn Greenwald at the Intercept had a very interesting follow up to this raid. He notes that:

UPDATE: A reader writes with an important clarification, supported by various media accounts:

Just one clarification on your article about the Australian ‘anti terror’ raids.

This despite the fact that the ‘threat’ was so high that the raids involved over 800 police.

A grand total of one person has been charged with terrorism-related crimes—one—and that has triggered a major fear campaign and a slew of legislative demands designed to dismantle basic legal protections. It is, indeed, a microcosm of a core disease of the 9/11 era.

Ah, but as we know, you never let the truth get in the way of a good story. Particularly a story that can be used to strip the plebs of civil rights. Which is precisely what happened last night at the Australian Senate. For details, let’s turn to the article in the Sydney Morning Heraldtitled, Terror Laws Clear Senate, Enabling Entire Australian Web to be Monitored and Whistleblowers to be Jailed. As an aside, ASIO stands for the Australian Security Intelligence Organization. We learn that:

Australian spies will soon have the power to monitor the entire Australian internet with just one warrant, and journalists and whistleblowers will face up to 10 years’ jail for disclosing classified information.

The government’s first tranche of tougher anti-terrorism laws, which beef up the domestic spy agency ASIO’s powers, passed the Senate 44 votes for and 12 against on Thursday night with bipartisan support from Labor.

The bill, the National Security Legislation Amendment Bill (No. 1) 2014, will now be sent to the House of Representatives, where passage is all but guaranteed on Tuesday at the earliest.

Anyone — including journalists, whistleblowers and bloggers — who “recklessly” discloses “information … [that] relates to a special intelligence operation” faces up to 10 years’ jail.

Any operation can be declared “special” and doing so gives ASIO criminal and civil immunity. Many, including lawyers and academics, have said they fear the agency will abuse this power.

Those who identify ASIO agents could also face a decade in prison under the new laws, a tenfold increase in the existing maximum penalty.

These changes have opposition support and would make it a criminal office to travel to a terrorist hot-spot without a reasonable excuse.

Oh, and this is just the first of three new anti-terror laws set to be introduced in Australia intended to neuter civil liberties. This is how freedom dies: 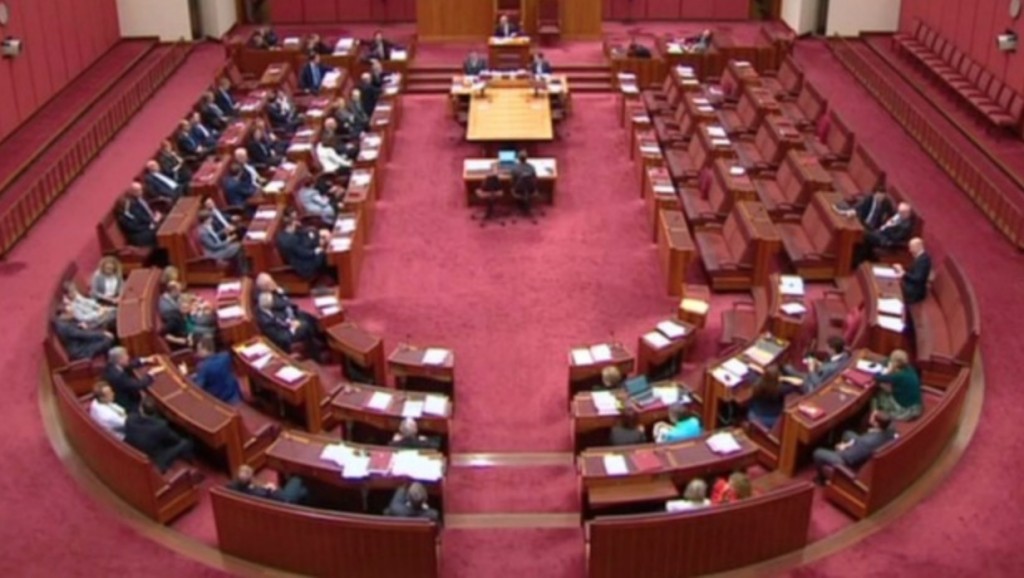