Billionaire claims world government "badly needed" to save the earth 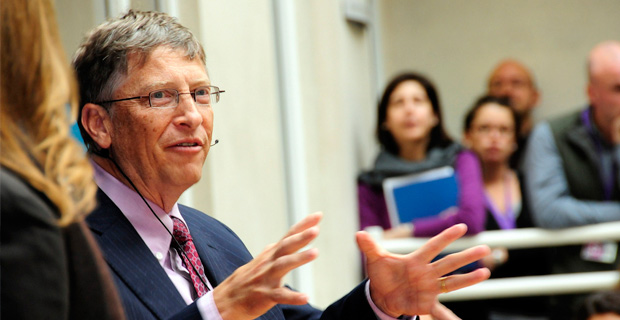 Billionaire Bill Gates called for “a kind of global government” this week, arguing that the creation of such a system would be needed to combat major issues such as “climate change.”

Speaking with Germany’s “Süddeutsche Zeitung” newspaper Tuesday, Gates decried the fact that a proper United Nations system has failed to materialize as planned.

“You can make fun of it, but in truth it was sad how the conference in Copenhagen is run, how individual who behave like the UN system failed,” Gates said according to an English translation in the Huffington Post.

Gates went on to stress his position further, stating that a global government was “badly needed” in order to combat an array of issues ailing the planet.

“Take the UN, it has been created especially for the security in the world. We are ready for war, because we have taken every precaution. We have NATO, we have divisions, jeeps, trained people,” Gates said. “But what is with epidemics? How many doctors do we have as much planes, tents, what scientists? If there were such a thing as a world government, we would be better prepared.”

The billionaire made headlines last week after introducing a plan to implement a cashless system in multiple third-world countries, a program that would undoubtedly give financial elites total control over monetary systems.

Despite the media’s constant glowing portrayal of Gates, which is rooted in his funding of major news outlets, a look at many of the so-called philanthropist’s pet projects reveals his true nature.

Aside from his founding of computing giant Microsoft, a corporation which has worked hand in hand with the NSA to eviscerate privacy, Gates’ role in the destruction of health worldwide is made obvious by the companies he invests in.

A breakdown of the Bill & Melinda Gates Foundation’s 2012 tax return by Mother Jones reveals billions in funding to corporations such as Coca-Cola, McDonald’s, Burger King and Kentucky Fried Chicken.

A major focus of the Gates Foundation has also been invested in vaccination campaigns, although Western media has completely ignored major ethical issues brought up by medical experts in countries such as India, where more than 47,500 children were paralyzed shortly after one of Gates’ campaigns.

Everything from gun control, Common Core and geoengineering, the practice of spraying toxic particles into the stratosphere to block the sun’s rays, has received millions in funding from Gates.

In reality, the call for global government by Gates and other wealthy elitists has nothing to do with lifting up impoverished nations. Such a government would instead guarantee global surveillance, global wealth inequality and a world run by the exact corrupt interests currently consolidating wealth and power worldwide.