Russian airborne troops are set to train how to target terrorists in America as part of a joint anti-terror drill with the United States which will take place in Fort Carson, Colorado at the end of next month. 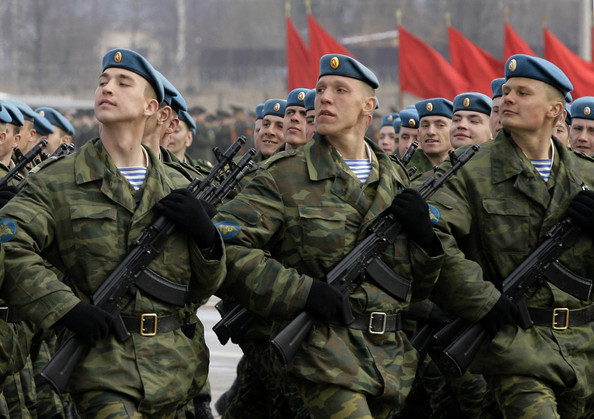 “Airborne troops from Russia and the United States would hold joint anti-terror drills in the U.S. state of Colorado between May 24 and 31,” reports the Xinhua news agency, citing Russian Defense Ministry Col. Alexander Kucherenko. The story was also reported by Russian news outlet RIA Novosti.

The exercises, which will mark the first time the respective country’s two airborne forces have held joint drills on U.S. territory, will revolve around the the “reconnaissance of imaginary terrorists’ camp and a raid,” and will also involve evacuations of the troops by helicopter.

The Russian soldiers will also be given access to U.S. special service weapons at Fort Carson.

However, the Russian troops won’t just be confined to a U.S. military base – on May 27 they’ll be out in the local community attending a baseball game in Colorado Springs.

“This announcement comes at a time when Russia actually has troops working in cooperation with China,” points out Business Insider’s Eloise Lee, making reference to one of the largest ever Russian-Sino naval drills currently underway in the Yellow Sea.

Alex Jones has documented foreign troops being trained on U.S. soil to deal with “insurgents” since the late 1990′s as part of “urban warfare drills”.

Back in July 2010, our reporters covered the Operation Vigilant Guard exercises in Chicago which involved Polish troops training alongside U.S. National Guard troops in drills focused around raiding terrorists and drug dealers.

According to SFC Mark Ballard of the Illinois National Guard, the Polish forces were “integrating into some of the civil military units that are participating in this exercise” as part of Illinois’ partnership with the Republic of Poland, a relationship based around “integrative training” and blending military and civilian forces in the event of a national emergency, as well as making this process of integration with foreign troops more “visible”.

The exercises also involved volunteers from Boy Scouts of America, which was telling in light of a 2009 New York Times report which detailed how Homeland Security is training boy scouts to take on and disarm “disgruntled veterans” who are described as “terrorists”.

Fears that foreign troops would be used to carry out gun confiscations and incarcerate American citizens during a time of martial law have circulated for decades, concerns stoked by remarks such as the following quote from Henry Kissinger reportedly made at the 1991 Bilderberg conference in Evian, France.

“Today Americans would be outraged if U.N. troops entered Los Angeles to restore order; tomorrow they will be grateful,” Kissinger stated.

The idea of foreign soldiers taking over America has often cropped up in television series and movies, most notably in the 1984 film Red Dawn, which depicted the United States being invaded by Soviet troops.

It is important to add that a story circulating which attempts to piggy-back off these confirmed drills in claiming that the U.S. has given Russian troops permission to “take and hold Denver airport” comes from a notorious disinformation source which routinely puts out bogus articles and as such should be completely disregarded as a hoax.

Watch our report about Polish troops training to target terrorists on U.S. soil in the video below.