In his iconic anthem “The Times They Are A-Changin’” (1962), Minnesota’s Bob Dylan immortalized the totally logical imperative (“don’t criticize”) that admonishes those who want to express their thoughts about an issue to keep their mouths shut until they have done the thorough research into the available unbiased science or history that might make clear what their stance should be before they spout off or blog about it or vote for some politician who has spouted off on issues he doesn’t understand. (By unbiased I mean that the science and history has not been influenced or re-written by some profiteering corporation or by those that are under the influence of those corporations.)

This essay is only partially about the highly-profitable over-vaccination campaigns conducted by Big Pharma and Big Medicine that are highly promoted by the “vaccinology-illiterate”. Sadly most of those illiterates don’t realize that they aren’t even close to understanding the totality of the real science that they are criticizing.

In fact there are very few scientists on the planet that truly understand the entirety of what could be known about vaccinology – and I admit that I am not one of them. But I have spent hundreds of hours reading and studying many books on vaccinology (many of which are in my personal library). I have also studied a lot of the journal articles and testimony of many vaccinology experts, and I also know that the so-called investigative journalists and trolls that are writing about the subject are actually illiterate about real vaccine science. In the process of criticizing what they don’t understand (and accusing those serious researchers who understand a lot more than they do) they are embarrassingly exposing their ignorance.

The subject of how to recognize a vaccinology illiterate individual would take a book-length treatise, but here are a small handful of tip-offs:

1) “Vaccinology illiterates” never mention the fact that vaccine manufacturers, in their clinical trials that they are obligated to do before applying for FDA approval, never do any testing on the safety or efficacy of their new vaccines when they are intramuscularly injected simultaneously with other vaccines(!);

2) When corporate “vaccinology illiterates” want to stir up the demand for more over-vaccination efforts, they repeatedly and endlessly have their equally vaccinology-illiterate journalist colleagues write about the latest viral infection outbreak (the one in New York only amounted to 900+ people out of a population of 302,000,000 over a period of 6 months!), and never mention that many of the victims had already been fully vaccinated;

3) Vaccine illiterate journalists never listen to or interview the parents of the thousands of children that have been vaccine-injured, vaccine-killed or have been afflicted with vaccine-induced autoimmune disorders;

4) Vaccine illiterate journalists, editors and publishers never interview the real unbiased vaccinology experts for their radio or television shows (check the latest hit piece from the BBC’s Claudia Hammond (with anthropologist Heidi Larson who has been hired by Wellcome Trust (which was acquired by vaccine maker GSK years ago) to start the Vaccine Confidence Project in England. Can you guess what the subject matter will be?

The hit piece can be found here.

5) To back up their opinions and bloggings on the safety or efficacy of vaccines, vaccine illiterates naively (or intentionally) use discredited sources of information that are supplied by profiteering corporate entities, paid-off government agencies or medical lobbying groups like the American Academy of Pediatrics that have serious conflicts of interest that they try hard to hide.

Being a “Vaccine Heretic” against the Church of Big Pharma. Co-opting Scientific Research

6) Vaccine illiterates never point out the following over-vaccination schedule for American children for 2019 that some vaccinology literate scientists project will cause a 50% incidence of autism spectrum disorders in American boys in just a few decades, that is, unless the once sacred Hippocratic Oath, the Precautionary Principle and the principle of Fully Informed Consent is somehow resurrected and then applied by the pediatric and medical communities;

Study this chart and understand that there are toxins in each of them, some of which have synergistic adverse effects. 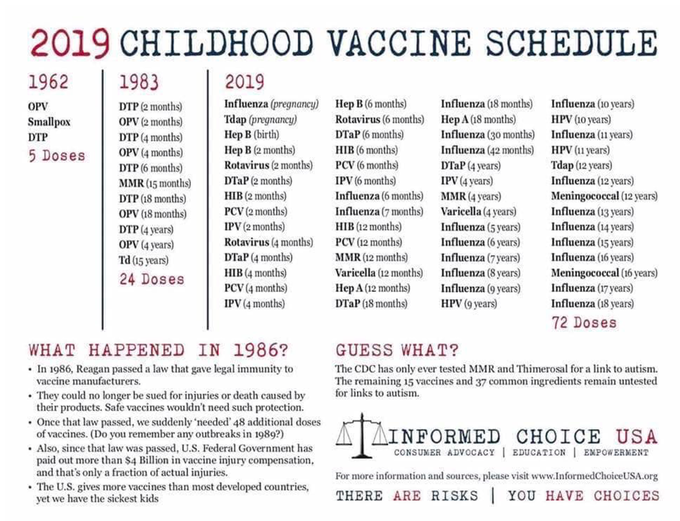 Below is a short list of untrustworthy corporate influences that have gradually acquired almost total control over the public conversations concerning the endlessly increasing number of neurotoxin-containing and auto-immunity-inducing vaccines. Sadly, the many internet trolls make gleeful use of the skewed disinformation from these sources (the many internet trolls are not listed, they can usually be found at the very top of Google’s lists):

4) the Big Pharma-/Big Vaccine-influenced mainstream media that takes 70% of its revenues from Big Pharma’s profiteers (thus self-silencing themselves when their investigative journalists should be doing deep explorations and revealing important, unwelcome truths about our often corruptible nation’s corporate and governmental leaders [like Watergate and the Pentagon Papers, for example]);

5) the many “charitable” foundations formed by billionaire investors or their families who kind of like the tax exemptions . These non-profit foundations surely own shares in pharmaceutical and vaccine corporations; and

6) assorted hedge fund managers and Wall Street investment firms that don’t really care about the corrupted, unethical, short-term, clinical trials that Big Pharma uses to so fool the (Big Pharma-infiltrated) FDA into approving its potential block-buster products without any concern for the long-term adverse consequences of their investment decisions.

In the case of the exceedingly complex science (and history) of vaccinology, very few laypeople (and very few physicians, nurse practitioners or nurses) have done the work, partly because they have not been able to find the hundreds of hours that it would take to even scratch the surface of the real science. Physicians are hopelessly over-booked and also heavily influenced by the propaganda groups listed above. Besides, unbiased vaccinology is NEVER taught in medical school.

One of the common denominators in the current totally preventable crisis is the large number of “vaccinology-illiterate” entities that are “criticizing what they don’t understand”.

Dylan’s powerful poetic truism mentioned at the top of this essay should be adopted by all good people. To remind readers of its power, here is the fourth verse of that song:

“Come mothers and fathers
Throughout the land
And don’t criticize
What you can’t understand.
Your sons and your daughters
Are beyond your command;
Your old road is rapidly aging
Please get out of the new one if you can’t lend your hand
For the times they are a-changing.

Dylan also had some important words for the profiteering elites discussed above in his 1985 song “When the Night Comes Falling from the Sky”:

“I saw thousands who could have overcome the darkness, but for the love of a lousy buck I watched them die”.

Note to readers: Forward this article to your email lists. Crosspost on your blog site, internet forums. etc.

Since his retirement from his holistic mental health practice, Dr Kohls has been writing the weekly Duty to Warn column for the Duluth Reader, Minnesota’s premier alternative newsweekly magazine. His columns, which have been re-published all around the world for the last decade, deal with a variety of justice issues, including the dangers of copper/nickel sulfide mining in water-rich northeast Minnesota and the realities of pro-corporate “Friendly” Fascism in America, militarism, racism, malnutrition, Big Pharma’s over-drugging, Big Vaccine’s over-vaccinating, Big Medicine’s over-screening and over-treating agendas, as well as other movements that threaten human health, the environment, democracy, civility and the sustainability of the planet and the populace. Many of his columns have been archived at a number of websites, including the following four: