University of Utah biologists came to this conclusion when they fed mice sugar in doses proportional to what humans consume and found it reduced the females' reproduction rates by 26.4 percent and increased their chance of death by 1.87 percent, according to a press release.

The male mice, however, showed no difference between the sugars in terms of survival, reproduction or territoriality, which may mean both sugars are equally toxic for males, researchers said.

“This is the most robust study showing there is a difference between high-fructose corn syrup and table sugar at human-relevant doses,” said senior study author Wayne Potts.

This study is the latest in a series of studies done by the University of Utah that used a new, sensitive toxicity test developed by Potts and colleagues.

“Our previous work and plenty of other studies have shown that added sugar in general is bad for your health. So first, reduce added sugar across the board. Then worry about the type of sugar, and decrease consumption of products with high-fructose corn syrup,” the study’s first author, James Ruff, said. High-fructose corn syrup found in processed foods and table sugar found in baked goods contain about the same amount of fructose and glucose, but the corn syrup contains separate molecules called monosaccharides, while table sugar consists of fructose and glucose that bond chemically, the press release said.

“When the diabetes-obesity-metabolic syndrome epidemics started in the mid-1970s, they corresponded with both a general increase in consumption of added sugar and the switchover from sucrose being the main added sugar in the American diet to high-fructose corn syrup making up half our sugar intake,” Potts said of the dangers of fructose and glucose. 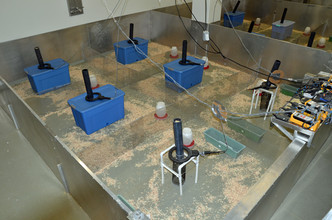 During the study, mice were fed a healthy diet with 25 percent of their total caloric intake coming from the high-fructose corn syrup or the table sugar for 40 weeks.

Following the 40 weeks, 160 mice were released into the six mouse barns, each containing eight to 10 male mice and 14 to 20 female mice. The mice competed for food, territory and mates for 32 weeks while in the barns.

The mice used in the study were regular house mice, since inbred lab mice naturally compete with each other, the press release said. All of the mice were fed the same fructose-glucose monosaccharides diet while competing in the barns.

Each mouse barn contained either open or protected nests. The radio chips implanted by scientists tracked the rodent’s location, and they found the males tended to compete for the better territories and the protected nests.

"Bodily decay is gloomy in prospect, but of all human contemplations the most abhorrent is body without mind."