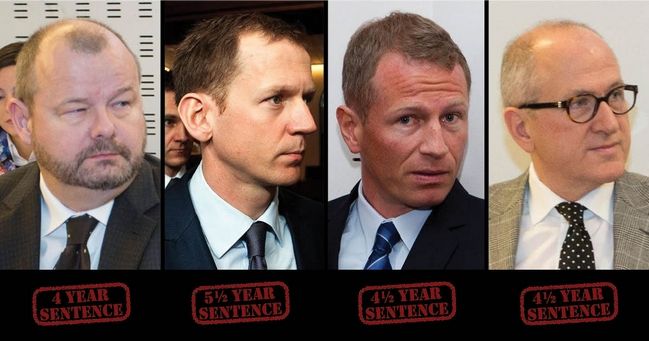 Four former bosses from the Icelandic bank Kaupthing have been sentenced to between four and five and a half years in prison. The Supreme Court of Iceland came to this conclusion today. The four were sentenced to between three and five and a half years in prison in Reykjavik's district court. The verdict was appealed to the Supreme Court.They are the former chief executive, the chairman of the board, one of the majority owners in addition to the chief executive of the Luxembourg branch. The foursome was accused of hiding the fact that a Qatari investor, Sheikh Mohammed Bin Khalifa Bin Hamad al-Thani, bought a stake in the firm. Al-Thani had bought the stakes with money illegally loned by Kaupthing.Al-Thani's purchase, a 5,1% share in the bank, was announced only a few weeks before the collapse. The investor's purchase was seen as a confidence boost for the bank while rumors circulated about the bank having troubles.The Supreme court confirmed the five and a half year verdict Hreidar Mar Sigurdsson, the former chief executive, received in the district court. Sigurdur Einarsson, former chairman of the board, was sentenced to four years in jail. The Supreme Court gave Olafur Olafsson, one of the majority owners four and a half years and Magnus Gudmundsson, the former chief executive of the Luxembourg branch, four and a half years. They received a three and a half year and three year sentence respectively in the district court.These are the heaviest sentences for financial fraud in Iceland's history. The four will have to pay their own legal costs for the case which amount to 82 million kronur or approximately 670 thousand US dollars. Sigurdsson and Einarsson are facing another and bigger case against Kaupthing in which it is accused of market manipulation. It is due to court on April 21st and is expected to take four weeks. In all nine former employers of the Kaupthing bank are facing prison time if convicted.