If you’re watching a video on football, you would expect to see recommended videos along the side of your browsing screen to include more football videos and perhaps a few videos similar to those you’ve seen before. But what if you saw recommended knitting videos and you’ve never seen such before and have never indicated an interest in them? What if you’ve never watched anything even remotely associated with knitting?

What if YouTube keeps recommending knitting videos and you keep rejecting these recommendations?

Did this happen to me? Something similar.

While researching my next book—Thermophobia, Shining a Light on Global Warming—I ran across an article about President Obama comparing “climate change deniers” to members of the Flat Earth Society—in other words, crazy. One cannot accuse Obama of being a heavy lifter when it comes to logic. When I voted for him in 2008, it was my own naiveté over his pretty, but empty rhetoric. I can learn from my mistakes.

Is this what YouTube is using to associate an interest in climate science with flat Earth lunacy? Are their programmers biased against those who believe in real science rather than popularity (“consensus”) pseudo-science? Or are they trying to make others think that questioning the “consensus” is crazy, like believing that the Earth is flat.

Questioning beliefs and dogma, and preferring scientific discussion does not equal belief in a flat Earth. That’s like equating knitting with football. Dumb!

Someone has an agenda to make people associate crazy ideas with questioning their agenda. For instance, the United Nations is doing a lovely job promoting Global Cooling in the midst of an ongoing Ice Age. That’s pretty crazy and potentially deadly for billions of us humans. After all, it’s pretty difficult to grow crops in the snow or in rain-starved land because the climate is suddenly colder. (Colder oceans means less evaporation, fewer clouds and less rain.) We live in an Ice Age (as evidenced by those little white things which persist at the poles throughout the year) and promoting a fear of Global Warming is the height of insanity. Does YouTube actively support this insanity? That would make them evil. Oh, well! 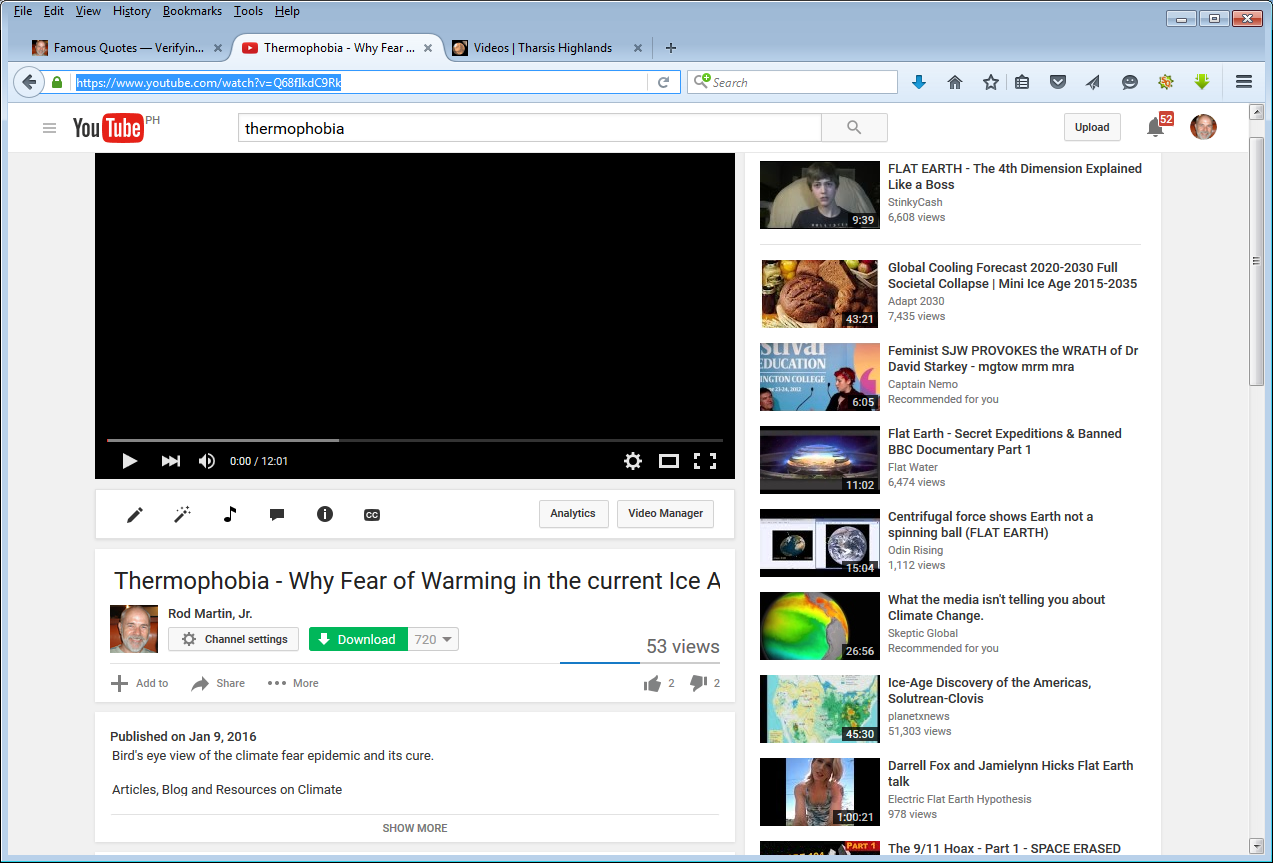 YouTube recommends several videos next to my new video on climate science. Half of them are about “Flat Earth.” Crazy or evil? Click on the picture to view full size.

But when a company like YouTube is either massively stupid or evil, big is the last thing they should be. Big stupid or big evil are not good, and I don’t know which is worse.

Perhaps we need to come up with a new, human-friendly, civilization-friendly video sharing website. But how do we keep it from being corrupted as has YouTube and Google?

I figured out in the last couple of years that corporations are based on one very evil principle—selfishness. That is their foundation. Everything they do must—by law—support the bottom line. It is the fiduciary duty of every corporate officer to be selfish and to increase the bottom line. Many have broken the law, killed thousands, avoided jail time and have greatly expanded the bottom lines of corporations. For this, they have been handsomely rewarded. When sweet, warm and fuzzy Nestlé buys up water rights and prevents people from getting water by which to live, the old 1950s jingle about Nestlé making “the very best” takes on a decidedly sour taste in my mouth. Corporations will be cute if they have to be, but they will gut you and toss your dead carcass in a pit if it will increase the bottom line.

Perhaps we need to get away from group think. Perhaps we need to avoid collectivism in all its forms. If we, as individuals, can stop being self-concerned, then we become invulnerable. The psychopaths who are promoting Global Cooling in the current Ice Age, and apparently also promoting “Flat Earth = Climate Science”—these psychopaths are self-concerned. That makes them vulnerable. They don’t mind committing any and all crimes, and that makes them fearless, but they are still doing these crimes because they want something. Perhaps ultimate power?

When I posted my recent video, Thermophobia: Extreme Weather, the recommendations next to the video showed 4 “Flat Earth” videos in the first 8.

YouTube recommends several videos next to my new video on climate science. Half of them are about “Flat Earth.” Crazy or evil? Click on the picture to view full size.