Putting it all in perspective

There's a lot of great information, and a lot of crap on the internet, and that's another argument people say instead of seeing it for what it is; given the magnitude of importance, I think people should think it's a good idea to at least look into the validity of the claims, because you'll find that if there was not a massive manipulation agenda, even beyond what has come out, the stress levels people speak of as an excuse to not want to look into seemingly negative issues would be nearly as nonexistent as the twin towers that were scientifically proven to have been a demolition, thermite being found in the rubble, explosions being heard, building 7 not even hit by a plane going down at free fall, not to mention the plethora of other evidence.

Charlie Sheen, and Rosie Odonnel, and many other prominent figures are speaking out... Why? because it's the truth, important, and unlike the misconception of being powerless, the globalists have even stated that they fear a global awakening and are losing the information war. (Hillary Clinton and Mr. Brezinski).

Some points to consider:

If any serious allegations were false, the people who have derogatorily been labelled as ''truthers'' or conspiracy theorists '' should be charged for defamation, but the criminal elements of the establishment ARE doing these things and have openly stated it in their own documents. Criminals and mentally deranged people like to brag and try and intimidate, but when you get past the initial fear by realizing we don't have a choice in the matter, it becomes apparent that the only thing to fear is fear itself.

I understand the common initial reaction most people have to this; I didn't take a chemtrail poster I saw put under the plexiglass of an advertizement in the metro in Montreal seriously. It was just too far out for me... Until I started noticing massive lines being made from horizon to horizon, expanding, while other jets made trails I was used to seeing as a kid that diminished quickly  . Here is a video I made showing the blatancy of this:
I'm not trying to convince, for the truth is just the truth. One can have their own opinion, but not their own facts. For example, why is there still fluoride in the water when recent Harvard studies have come out showing it to be detrimental to health? Why are we still burning oil and using nuclear power that has now done the most horrific crime against life; to irreversibly change the very structure of the DNA of life on this planet when clean, free energy technologies exist but are suppressed to allow further economic control, when money is power. - It also allows the excuse to call for population reduction and to make people look down on their own species for ''doing this to the earth''. - When it's all being orchestrated.
Science fiction films can be entertaining, but they play a role in making people shy away from far out things, given that social conditioning has made it so that everything has to be a joke to people, as we're unnecessarily deprived of our true potential and fulfillment, happiness and peace, the way things should be.
While most people concerned about sports and entertainment, they are missing the bigger picture, of which the distractions are merely a pixel of; That it's actually REALLY EMPOWERING AND FUN, AND MAKES ME HAPPY THAT ILL FELL THAT I'VE  DONE MY BEST, AND THE RIGHT THING, AS WELL IN THE AFTERLIFE. There is a massive amount of evidence on the paranormal. so I'm not naive, if I was I would believe everything the government  told me.
Here is a screenshot from the Club of Rome publication ''First Global Revolution'': 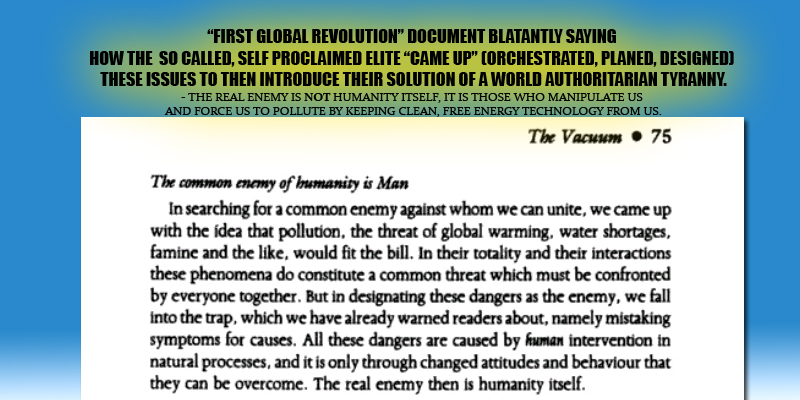 - THE REAL ENEMY IS NOT HUMANITY ITSELF, IT IS THOSE WHO MANIPULATE US AND FORCE US TO POLLUTE BY KEEPING CLEAN, FREE ENERGY TECHNOLOGY FROM US.

Imagine a world where people embraced creativity, love, acceptance of other people's differences, doing good, nobody bullying, no violence; the world it would be if not for this manipulation from those who have been controlling the world through deception for thousands of years. Imagine a world, free from social engineering and engineered wars, having to pay for energy when we could literally be flying around in crafts using the technologies that are being kept from us. It should be the main thing on people's minds, to revert things to the way they should be, and it would be, if they were aware of just how positive it is to take action.

This therefore is an incredible time to be alive, because we have the ability to actually do something and it, and it is about time we put an end to it peacefully, and all what has to happen is for the so called elite to get spiritually educated as well, for it's probably not the best idea in the world to destroy the world for themselves as well, unless they are the result of aliens interbreeding with the native people of the land, and I've looked into that, because I came across  some severely outrageous info, about reptilians, but interestingly, they are reported all over in ancient history, but there is no need to get into that beyond making the point that it's not David Icke's opinion, and therefore there's no reason to try and discredit everything else he covers.  However with all of what needs to be verified and made public so the negativity can finally stop, it's important to focus on things that everyone can relate to, like free energy tech suppression, additives in food and vaccines, etc. Not too many people new to this are going to think you're sane talking about  lizard men unless you can convey the information effectively, like the presentation of the ancient tablets in the movie Prometheus. Again, I have to cover this as well, to make it clear.

Since it affects not only our immediate lives, but the lives of every living creature on Earth. and we have the chance to go down the path of  liberty, not tyranny, make this world the way it should be, with true fulfillment.